On Friday night, I returned to Toronto around 9:30 p.m. from Ottawa after attending an MP swearing-in. The CN Tower was lit in red, white and blue in solidarity with Paris and the French people after the tragic terrorist attacks on Friday night.

What a day for all of these new MPs to be sworn in. While on Parliament Hill, I poked my head into many different rooms to see various new MPs preparing to take their oaths with families and supporters in attendance, in addition to the ceremony I was attending. The security was tight with police guarding all Hill door entries. A preliminary bag check occurred at a table outside the entry to the building. A further detailed security check occurred inside that is comparable to an airline check. I was happy to do it and my mind turned back to it a few times as I read about the developing situation in Paris while on the VIA train that was zipping back to Toronto.

This newly formed federal government is thrust into grappling with yet another international terror attack confronting one of our closest allies. And these new MPs will never forget their swearing-in date of Friday, November 13th, that's for sure.
Posted by Nancy Leblanc at 5:23 PM

Last night we held a provincial riding association fundraiser at Vesuvio's Pizzeria in the Junction. It was the first of many annual spaghetti dinner fundraisers to come and last night's festivities included 100 supporters, volunteers and donors to the provincial association. We were thrilled to have the Hon. Tracy MacCharles in attendance. Many were happy to meet with her and hear her speak about the landmark work that the provincial government is doing in the areas of prevention of sexual violence & harassment and in the promotion of women in senior management of companies and on boards of directors, in particular. A hearty thanks as well to former MPP David Fleet for his attendance and remarks and to the entire executive of the Parkdale-High Park provincial association. We could not have asked for a better night. A sell-out well in advance, great food - dinner included pizza, salad, spaghetti & meat balls and lasagna - terrific company, conversations and tremendous liberal spirit! See you next year! 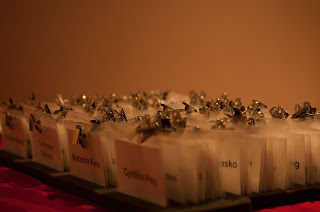 Posted by Nancy Leblanc at 2:30 PM

As the Trudeau government prepares to be sworn in on the 4th, there are bits and pieces of substantive news breaking about the new government's priorities that are creating a sense of the shift in direction that we will happily be experiencing.

One such item that will be of interest to many Parkdale-High Park residents is the confirmation reported tonight in the Toronto Star that indeed, the new federal government will not support the expansion of Billy Bishop airport to enable jets to fly in and out. Given that the federal government is one of the key parties to the governing agreement over the airport, this effectively means that the issue is resolved against the wishes of the private owner of the airport and in favour of Toronto residents who largely did not support this expansion. In south Parkdale in particular, the issue saw much opposition from residents and many will be happy to hear this news.

Update (Nov. 15th):  On the evening of Thursday, November 12th, Marc Garneau posted the following tweets on Twitter in respect of expansion at Billy Bishop airport, confirming that the federal government will not support the proposed expansion:

As the new Minister of Transport, I have been enjoying learning about my files, including re: Toronto Island Airport" 1/2
— Marc Garneau (@MarcGarneau) November 13, 2015

I confirm that GoC position is same as LPC commitment: we will not re-open tripartite agreement for YTZ 2/2
— Marc Garneau (@MarcGarneau) November 13, 2015

Some uncertainty had been created on Thursday when Garneau had appeared to leave the door open to expansion upon media inquiry. His clarifications on Thursday evening effectively put an end to the issue. My view was always to support the public interest on the waterfront and oppose the expansion which had been driven by an airline's private financial interests and had the potential to burden so many public uses of the waterfront. I am glad that the new Canadian government has listened to the residents of Toronto and gotten the balance right.
Posted by Nancy Leblanc at 12:04 AM